Much ado is made about the utility of keyboard shortcuts. The more hotkeys you use, the more efficient you’ll be, right? Computer literate people are supposed to avoid the mouse as much as possible. Using a mouse to navigate through a menu tends to be slower than using a shortcut.

But why are button shortcuts limited to keyboards? Mice, after all, have buttons too. The problem is that most mice only have two or three of them. Since those buttons are used for core OS functions, it’s hard for them to also perform shortcuts.

But why do most mice only have 2-3 buttons? It’s a silly restriction! If you put more buttons on a mouse, you get more power. 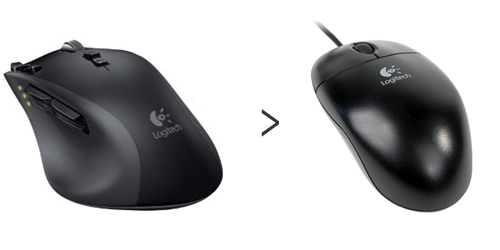 Unless you’ve managed to transcend into some sort of hyper-zen keyboard/human symbiosis, you still spend part of your day with your hand on a mouse. And when it’s there, if you need to move back to your keyboard to perform a single action, it slows you down.

An example: suppose you’re navigating a webpage with your mouse. You want to move to a different tab in your browser. Most people do one of two things: (1) move the mouse up to the new tab, click it, and then move it back down to the main page or (2) momentarily shift their mouse hand over to the keyboard and press a shortcut that moves browser tabs. But there’s a quicker option: press the button on your mouse that moves browser tabs.

The key is getting a mouse that has such a button. For the past year I’ve been using that kind of mouse. I love it. After trying several options, I settled on the Logitech G700, which has thirteen programmable buttons [1]. If you use a mouse like the G700, you’ll want to use software to manage what those buttons do. I recommend SteerMouse [2]. SteerMouse allows you to set each of those buttons to the tasks you perform most often [3]. 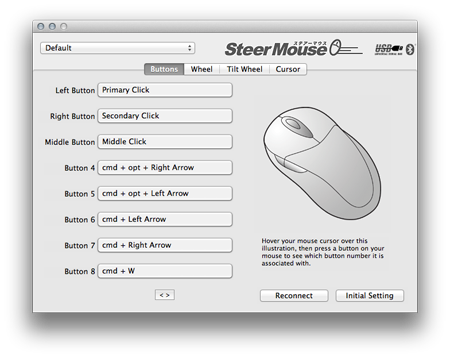 I’ve set my mouse shortcuts to facilitate things like closing windows
(⌘ + w), moving forward and backwards in a browser (⌘ + ←) and taking a screenshot (⌘ + shift + 4). I’m sure yours will be different, personalized for you. SteerMouse also allows you to set application-specific shortcuts, giving adventurous folks even more flexibly.

In isolation, using a mouse shortcut instead of a keyboard shortcut only saves a fraction of a second. But once you get in the groove, you can use hundreds of mouse shortcuts every day. I estimate that I use about 600 mouse shortcuts per day, each of which saves me about half a second. So the G700/SteerMouse combo saves me about five minutes per day. That’s not a huge amount of time, but it adds up. If you create $200 of value per hour, then hotclicks are worth $6,000 annually.

This is the sort of thing that’s primarily geared towards “professional” computer users–programmers, designers, etc. I won’t be buying G700’s for my parents. You sacrifice some elegance and simplicity when you do this, just as you sacrifice elegance when you use a laptop instead of an iPad to write an email. But most people I know still prefer to write email on a real computer. If you buy a programmable mouse, you may soon feel that using the old 2-button variety feels like using an iPad to compose a very long email.

[1] I chose the G700 because it’s the model that offers the most buttons while still working with SteerMouse and not having mushy buttons (a personal pet peeve). But I wish there were a model that had more buttons; I think that would allow me to be more efficient.

[2] SteerMouse is for OS X. I’m unfamiliar with options for other operating systems.

[3] I’ve spent a lot of time using a Magic Mouse and I really want to like it–the concept of a multi-touch mouse is alluring. But I could never get the damn thing to perform consistently with modded with shortcuts; simple operations like right-clicking had less than 90% success rates.

We launched SeatGeek in 2009 at TechCrunch 50 (now renamed “Disrupt”). The elevator pitch was “Farecast for sports and concert tickets.” The site forecasted if ticket prices for an event would rise or fall so that a buyer could time her... Continue →